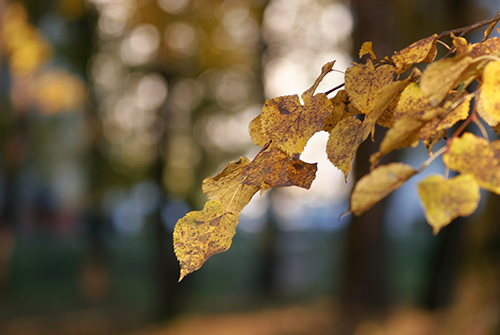 At Hendricksen Tree Care, we have helped you get to know the trees in the Chicago area, and possibly the trees on your own property, through our blog series on the native trees of the Chicago area.  While we certainly believe it is important to know about and appreciate the trees in our area for their natural beauty, it is also important to understand the threats to our trees.  There are many tree diseases and pests that can cause serious damage to the tree, especially if the problem is not noticed or treated.  That is why we have started a new series on the common trees and insect pests that can affect your trees in the Chicago area.

The fungus that causes Dutch elm disease is transmitted by insects such as bark beetles and it causes the vascular system of the tree to clog, restricting the flow of water and nutrients.  The main symptoms of the disease are browning and wilting of the leaves which will lead to defoliation and branch dieback.  If the disease is not noticed and treated early, it will likely lead to the death of the tree.  In this guide, we will explain the life cycle and main symptoms of Dutch elm disease as well as discuss the best ways to treat and manage the disease.

The best defense against Dutch elm disease is to prevent your trees from getting infected in the first place.  At Hendricksen Tree Care, our professional arborists provide tree care and maintenance services to help protect your elm trees against diseases such as Dutch elm disease.  We will make sure your trees are effectively maintained with fertilizer applications, pruning, and preventative treatments to help your trees better resist the disease.  If your trees do become affected, we can diagnose the problem and immediately come up with effective solutions to treat the disease.

Dutch elm disease is caused by the fungus Ophiostoma ulmi and as the name suggests, American elm trees are highly susceptible to this disease.  There are two main ways that an elm tree can contract Dutch elm disease; from the elm bark beetle or through root grafts.  Once the fungus enters the tree, it attacks the xylem, or water-conducting cells and the tree will respond by producing a chemical that will further clog the xylem.  The restriction of water and nutrients will cause the tree to wilt and eventually die.

When are Trees Susceptible?

Elm trees are the most susceptible to Dutch elm disease from the spring through mid-summer.  This is because the water producing elements within the tree are produced during this time of year.  Elm trees are less susceptible to this disease in drought conditions and when experiencing vigorous growth.

European elm bark beetles overwinter within the tree that they hatched as both adults and larvae.  During the winter, they will feed on the host tree and emerge as adults in the spring.  They will then find a healthy elm tree and feed on the inner bark and small branches before repeating their breeding cycle two or more times during the growing season.  These beetles transmit the Dutch elm disease fungus when they leave the stressed or dying tree that they hatched in and feed on crown of a healthy tree.

The native elm bark beetle differs from the European bark beetle in that it overwinters within the bark of lower stems of a healthy elm tree.  They emerge in the spring to feed on the inner bark and branches of the healthy elm before leaving to lay their eggs in a stressed or dying elm.  These beetles often transmit the Dutch elm disease fungus when feeding in the spring or when making its overwintering site in the fall.

Once the fungus is transmitted to the tree, it will find its way to the xylem and restrict the flow of water and nutrients through the tree.  European elm bark beetles tend to transmit the fungus in the upper branches of the tree.  In this case, the fungus will cause browning and wilting of the leaves and branches while traveling down the crown.  If the fungus enters the tree in the lower bark from the native elm bark beetle or through root grafting, it will move its way up the trunk to the canopy.

The speed in which the disease progresses depends on several factors including the size of the tree, the location of the infection, time of year, climactic conditions, and the response of the tree.  Dutch elm disease can progress quickly and kill a tree within one growing season or develop more slowly over a couple of years or longer.  Some trees can even survive and recover from Dutch elm disease. 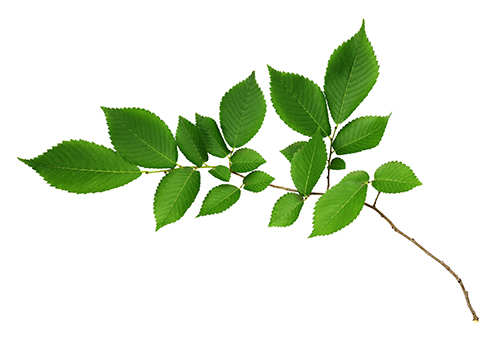 As explained above, the fungus that causes Dutch elm disease attacks water producing cells within the tree and restricts water and nutrients from moving freely.  While this can’t be seen, the effects of the disease can be seen on the outside of the tree.  The following are the main signs of Dutch elm disease.  These symptoms typically become visible in the late spring and beyond, but they can be visible in early spring if the tree was infected the year before without showing symptoms. 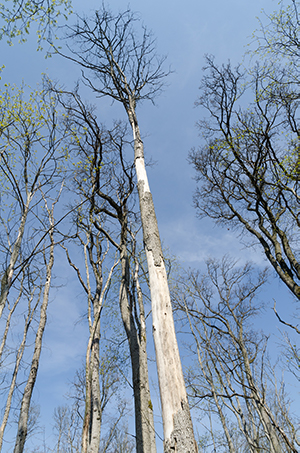 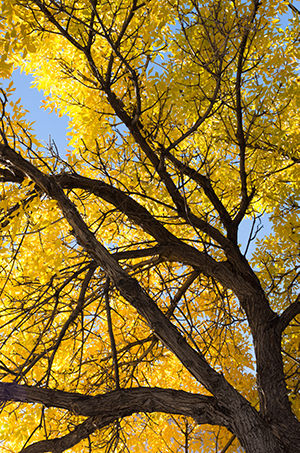 If you have elm trees in your yard, it is important to always be on the lookout for signs of Dutch elm disease.  Make sure you call a professional arborist right away if you believe your tree might be infected so they can properly diagnose and treat your tree in time to save it.

At Hendricksen Tree Care, our professionals can accurately diagnose Dutch elm disease, as well as other tree diseases, and put together a plan for treatment.  We will discuss your treatment options with you and help you choose the right option based on the situation and your budget.  We take great pride in caring for your trees and we will try treating your tree before resorting to removal.  Our arborists at Hendricksen Tree Care are available to treat and diagnose trees in Arlington Heights, Northbrook, Mount Prospect, Lake Bluff, Lake Forest, Wilmette, Park Ridge, Libertyville, and the surrounding north and northwest Chicago suburbs.

Watch for the next installment of our series on the common tree diseases and insect pests in the Chicago area.