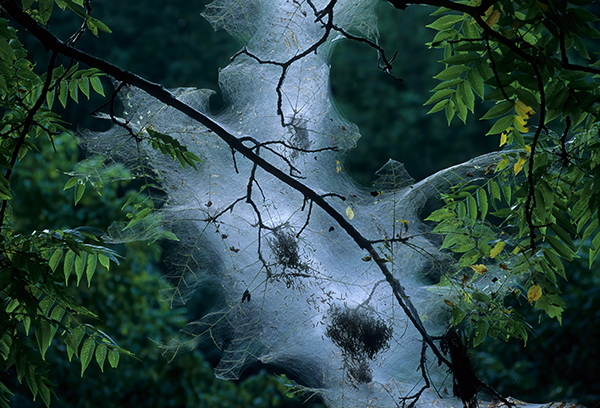 Does your Chicagoland backyard look like a scene from a horror movie? Don’t worry, this blog will explain how to deal with these nuisance insect pests called tent caterpillars

The beginning of the summer is a great time in the Chicago area.  The warm weather is back, and the trees are in full bloom for the growing season.  However, the return of warm weather and freshly grown foliage also means that those annoying pests that can damage your plants are back.  With the return of the growing season and the pests that come with it, we have returned with our series on tree diseases and insect pests of the Chicago area to take a closer look at a pest that defoliates trees, tent caterpillars. 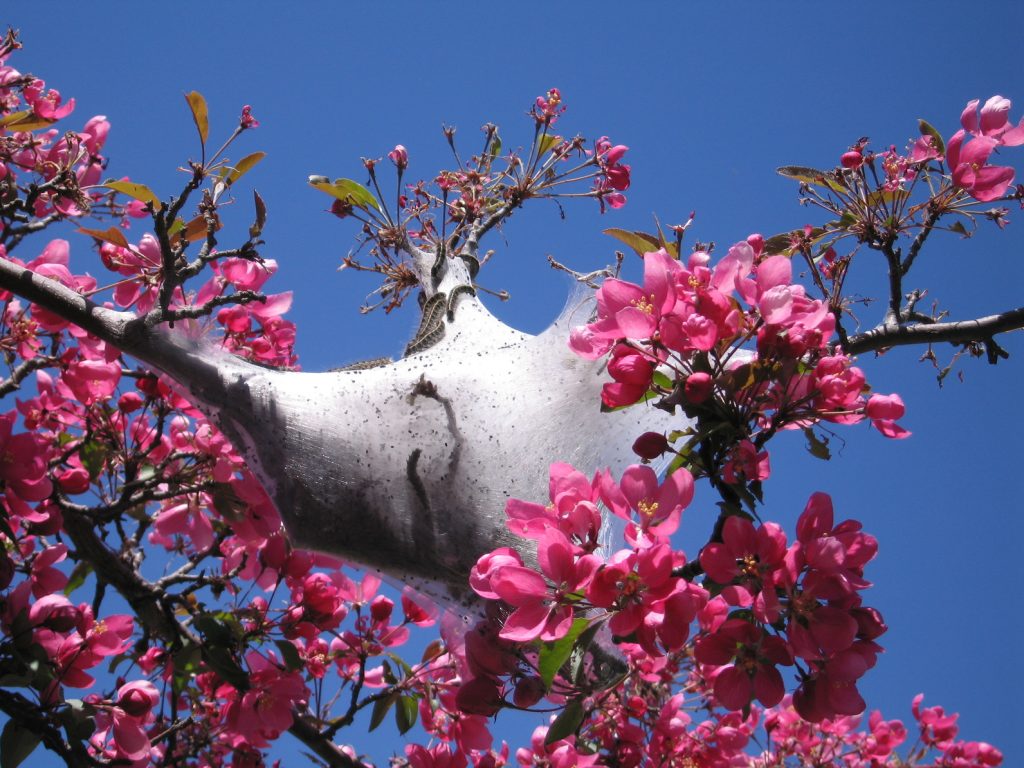 Tent caterpillar nests tend to form in the early Spring, and although not usually deadly to trees, can be a real eye sore in your Spring landscaping

Most tent caterpillar species overwinter in egg masses formed by female moths the previous season.  The female moth will deposit its eggs and use a sticky substance called spumaline to hold the eggs together in a mass.  The spumaline keeps the eggs hydrated, protects them from cold winter weather, and prevents insects like wasps from eating the eggs.  The egg mass is usually attached to bark or twigs and it is dark brown or gray in color.  Each egg mass can hold 150 to 400 eggs.

In the early spring, the tent caterpillars hatch, usually at the same time the leaves of the host tree begin to appear.  The larvae begin building their silk tents almost immediately which serve as a shelter for the caterpillars between feedings.  These tents are generally built in the spaces between smaller limbs, and they are always positioned in an area where they are hit by the morning sun.  This is important because tent caterpillars need to bask in the sun to raise their body temperatures high enough for them to be able to digest.

The tents are made with layers of silk and contain multiple compartments.  Tent caterpillars will congregate in the top compartment when they need warmth from the sun and depending on their body temperature, they may move to lower compartments that get progressively cooler.

Shortly after the tent caterpillars become fully grown, they will begin looking for areas to pupate.  Some may pupate under bark or leaves on the host tree while others may leave the tree to pupate under the eaves of houses or in dead plant materials on the ground.  Their cocoons are made from silk and a white or yellowish crystalline substance that can irritate human skin.  In about two weeks, they emerge from their cocoons as adult moths.

The moths of tent caterpillars do not feed but spend their short adult lives mating.  The female moth releases a pheromone after emerging from the cocoon to attract males.  After mating, the female will deposit its eggs on the bark or twig of a tree and cover the eggs with spumaline to form the egg mass which will overwinter and hatch the following spring.

The female dies shortly after forming the egg mass which can occur within 24 hours of emerging from the cocoon.  Adult males typically only live for a few days to a week.  There is only one generation per year for all tent caterpillar species. 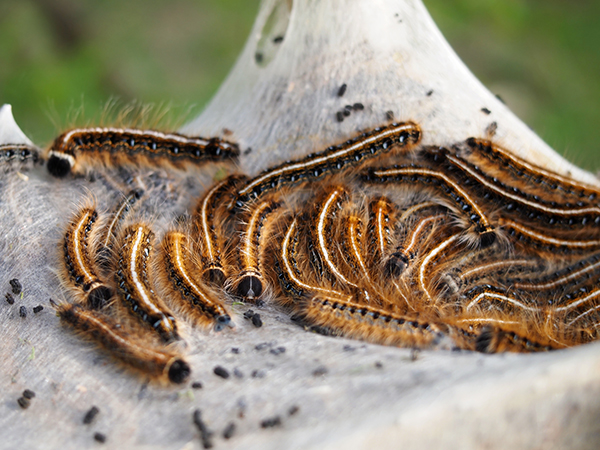 Closeup of the Eastern tent caterpillar

The only damage caused by tent caterpillars is the defoliation of the affected trees.  In most cases, the tent caterpillars will defoliate a few branches on a tree before they pupate, and the tree will regenerate new leaves without suffering any real damage.  However, the damage can be much worse in severe cases.

The yearly populations of tent caterpillars tend to be boom or bust, and in the boom years they can cause a lot of damage.  The forest tent caterpillar especially is known to have boom populations in which a large infestation can defoliate acres of forests.  Fortunately, these large outbreaks never last more than 2-3 years as disease, parasitoids, and starvation from quick defoliation decimate their population.

The following are the signs of a tent caterpillar infestation: 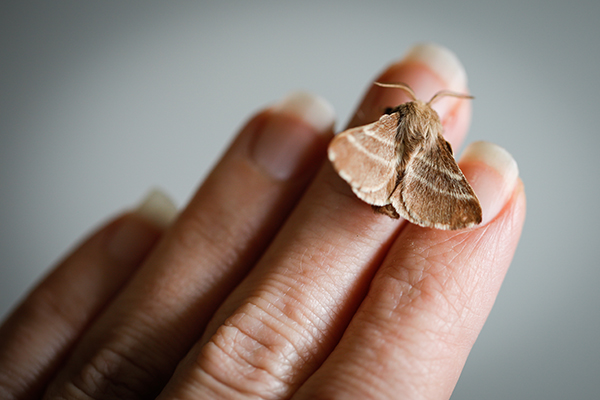 There are several effective methods of tent caterpillar control that you can use to minimize their damage.  Depending on how badly your trees are affected, it may not be necessary to take any action.  Our professional arborists at Hendricksen Tree Care can assess the extent of the problem and recommend an appropriate course of action.

While tent caterpillars are not a cause for concern in some cases, they can be in certain circumstances such as repeated infestations or infestations of a stressed tree.  Even if they pose no long-term damage to your trees, maybe you don’t want them defoliating an ornamental tree on your property.  If you find silk tents on your trees and aren’t sure what to do, contact our professionals at Hendricksen Tree Care.

Our arborists will inspect your trees to determine the type of infestation as well as the extent.  We can then advise you on the best action to take depending on the situation and your budget.  We provide tree trimming services in which we will remove the affected branches and we can also administer insecticide treatments if necessary.  Hendricksen Tree Care provides complete tree care services for homes and businesses in Arlington Heights, Winnetka, Park Ridge, Palatine, Mount Prospect, Skokie, Glenview, Lake Zurich, and the surrounding north and northwest Chicago suburbs.

Stay tuned for the next installment of our series on the common tree pests and diseases in the Chicago area.