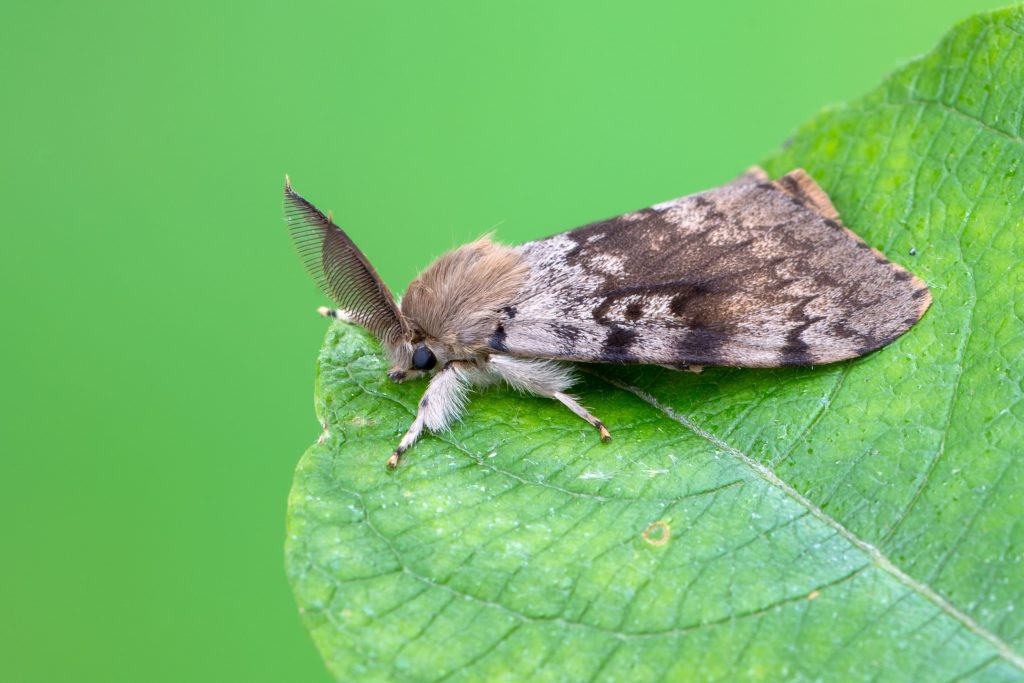 The adult gypsy moth does not eat your tree foliage, but lays eggs that will hatch the following season that will harm the tree

We return this week with our series on the common tree diseases and insect pests in the Chicago area with a closer look at a pest responsible for widespread defoliation, the gypsy moth.  The gypsy moth (Lymantria dispar dispar), also known as the European gypsy moth, is an invasive species from Europe.  It is known to devour the foliage of hundreds of species of trees and shrubs and can destroy millions of acres of trees in a single season.  Trees attacked by the gypsy moths are not usually killed unless they are already weakened, but multiple seasons of defoliation of a single tree caused by the gypsy moth can make it more vulnerable to diseases and other insect infestations that can lead to the death of the tree.

Gypsy moths were introduced to the U.S. in 1869 by Etienne Leopold Trouvelot who wanted to start a silkworm industry by interbreeding the gypsy moths with silkworms.  It is believed that the gypsy moths escaped his residence in Massachusetts, and it is unknown how Trouvelot reacted or if he alerted officials of the release.  It wasn’t long before they became a notable nuisance as the first destructive outbreak occurred in 1889.  After this outbreak, entomologist Maria Elizabeth Fernald discovered that the gypsy moth caterpillar was responsible and the next year they began an eradication program to eliminate the moth.  However, the gypsy moth continued to spread as the larvae can be carried by the wind and its eggs can be transported in firewood.  It has spread to cover all of the New England area and has made it as far west as Wisconsin and Illinois.

Gypsy moth caterpillars have dark bodies with lighter colored faces, red and blue spots on their backs, and hairs that protrude from their bodies.  They are pests in their larval stage as adult gypsy moths only live for about a week and they do not feed because they have no digestive systems.  It is important to look for signs of gypsy moth egg masses and caterpillars early in the season to prevent defoliation of your trees.

Fortunately, there are ways to control gypsy moths to help prevent defoliation.  If you believe the trees on your property may be affected, talk to our professional arborists at Hendricksen Tree Care.  We provide tree treatment and maintenance services to help protect your trees from infestations and take action if your trees are affected by the gypsy moth.  Our arborists will assess the infestation of your trees and come up with a solution that will rid your trees of these pests.

Life Cycle of the Gypsy Moth 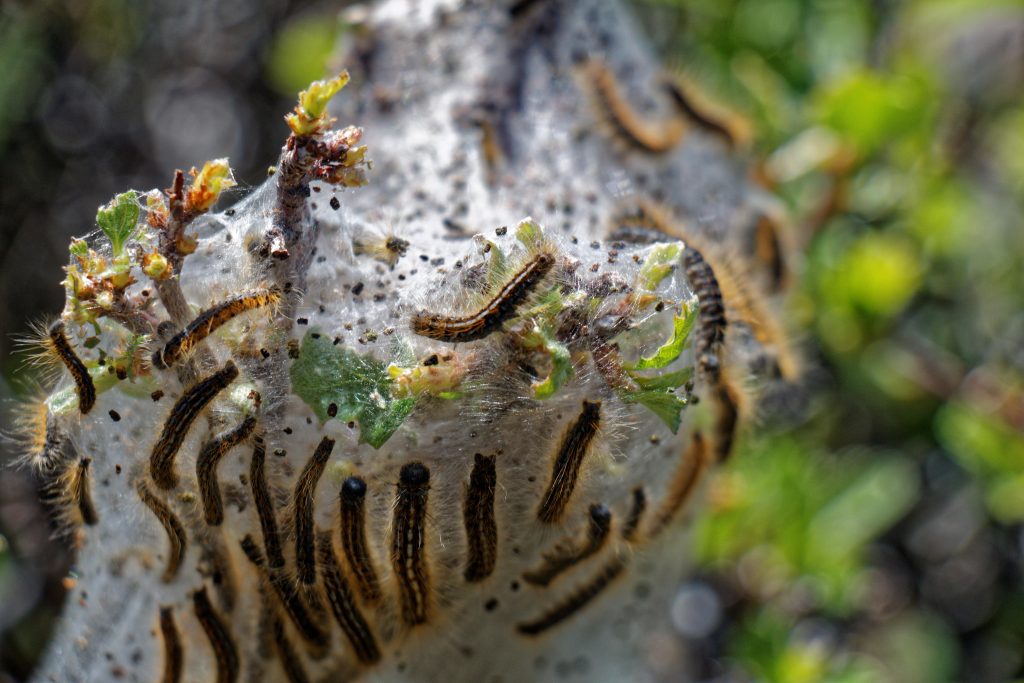 Gypsy moths have one life cycle per year that consists of four stages: eggs, larval, pupal, and adult.

Gypsy moths cause damage to trees in their larval stage when they are feeding on leaves.  These moths are not picky eaters as they are known to eat the leaves of 500 different species of trees and shrubs, including trees that are commonly found in the Chicago area such as oak trees, beech trees, birch trees, maple trees, pine trees, spruces, alders, cherry trees, linden trees, dogwoods, cedars, sycamores, and much more. 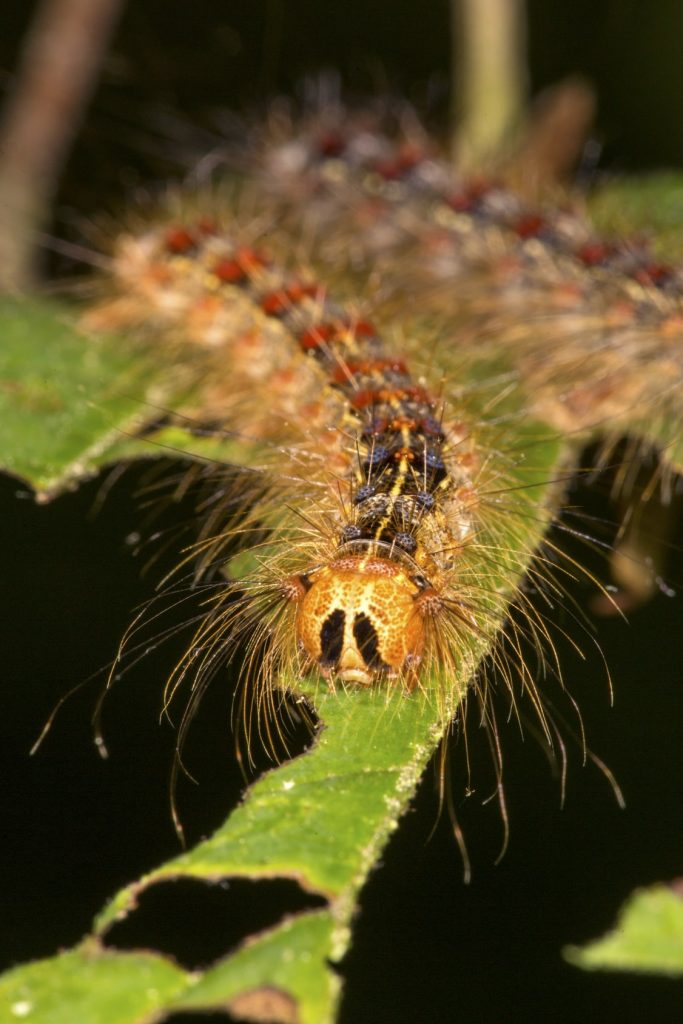 Half eaten leaves are a telltale sign of gypsy moths

Signs of a Gypsy Moth Infestation

It is important to look for signs of a gypsy moth infestation early in the spring before they hatch and start feeding on your trees.  The following are signs of the presence of gypsy moths:

Because the gypsy moths cause the most damage in their larval stage, it is best to take action to control them before their eggs hatch.  However, there are methods of gypsy moth control that are effective at each stage of their life cycle.

Since becoming an invasive species in the U.S., gypsy moths have spread from New England to the Midwest and caused widespread defoliation.  While they alone will not usually kill a tree, defoliation can stress a tree and make it vulnerable to diseases and other pests that can cause its death.  Trees that are attacked by gypsy moths multiple years in a row are at a higher risk for more serious problems.  It is best to have the moths removed from your trees to prevent significant defoliation.

Our arborists at Hendricksen Tree Care can identify the signs of a gypsy moth infestation and take the appropriate steps to eliminate them from your property.  We can effectively administer insecticide treatments to kill the eggs and we can also help ensure that your trees are properly fertilized and pruned to make them less of a target.  We are available to provide tree services in Northbrook, Arlington Heights, Winnetka, Palatine, Park Ridge, Mount Prospect, Highland Park, and the surrounding areas of the north and northwest Chicago suburbs.

Watch out for our next edition of our series on the common tree diseases and pests in the Chicago area.