The Japanese beetle, an invasive insect pest in the Chicagoland area

Today we continue with our series on the common tree diseases and insect pests in the Chicago area to discuss an invasive pest, the Japanese beetle.  Japanese beetles (Popillia japonica) are native to Japan but considered an invasive species in the U.S. as they are known to feed on the leaves of more than 300 species of plants including bushes and trees.  Adult Japanese beetles skeletonize leaves, destroying the foliage of affected plants and leaving them in a weakened state.  The Japanese beetle grubs are also a problem as they feed on grass roots which can kill a lawn.  Effective Japanese beetle control involves action against the adults as well as the grubs.

Japanese beetles do not cause much of a problem in their native Japan because they are controlled by natural predators.  In the U.S., the absence of their natural predators makes it difficult to keep their population in check.  The Japanese beetle was first discovered in the U.S. in a plant nursery in New Jersey in 1916 but may have entered the U.S. as early as 1912 within a shipment of iris bulbs.  The beetles have become established or partially established in more than 70 percent of the contiguous U.S. according to the U.S. Department of Agriculture.  Adult Japanese beetles are known to feed on many types of plants from crops and bushes to trees and their grubs are the most widespread turf grass pest in the U.S.

Japanese beetles are easy to identify with their copper colored wings and metallic green thorax and head.  They also have white tufts of hair that stick out from under their wings and two antennae that each have what look like three tiny feathers at the ends.  The Japanese beetle grubs are cream-colored and somewhat transparent, and they can be found in the soil curled into a “C” shape.  These beetles can cause damage in both stages as the adults feed on foliage and the grubs feed on grass roots.  It is important to recognize the signs of both so you can prevent mass defoliation and damage to your lawn.

If you notice dead patches in your lawn or the skeletonization of the leaves of your trees or plants, you may have a problem with Japanese beetles.  Our professional arborists at Hendricksen Tree Care can diagnose infestations and provide tree treatment and maintenance services to treat infestations from pests like the Japanese beetle and protect your trees and shrubs from further infestations.  We will inspect the extent of the infestation and the damage to your trees to determine the best solution.

Japanese beetles cause damage to plants in their adult and larval stages.  It is important to know the lifecycle stages of the Japanese beetle and the type of damage they cause in each stage:

Adult Japanese beetles emerge from the soil between late spring and mid-summer and mate during the summer months.  The females burrow a few inches deep into the soil to lay their eggs and they can lay up to 60 eggs in their lifetimes.  They are most likely to lay their eggs in sections of grass that are healthy and well irrigated.

The eggs hatch in the mid to late summer and the larvae, commonly referred to as grubs, begin feeding on grass roots close to the surface of the soil.  The grubs will grow in several stages until they reach about 1 inch long.  As they grow, they can devour more grass roots which causes the grass at the surface to discolor and die.

As the temperature gets colder in the fall, the Japanese beetle grubs go deeper into the soil until they are deep enough to survive the cold winter weather.  In the spring, the grubs move closer to the surface of the soil and again feed on grass roots.  In the late spring, they will enter their pupal stage and in about two weeks, they will emerge from the soil as adults.

The adult Japanese beetles come out of the ground in the late spring and early to mid-summer and they only live between 30-45 days.  During this time, they feed on the leaves, flowers, and fruit of nearby plants including bushes and trees.  They typically target plants that are distressed, and damaged leaves release an airborne chemical that attracts other Japanese beetles which can result in serious damage to the affected plant.  Japanese beetles skeletonize the leaves in addition to eating flowers and fruit which can leave the affected plants weakened and vulnerable.

During their adult lives, these beetles alternate between feeding and mating, and the females can lay as many as 60 eggs in their lifetimes.  Each time after the female mates, it will burrow a few inches into the ground to lay their eggs and will repeat this several times throughout the late summer.  By the time the fall season begins, the adult Japanese beetles will have died off, but the grubs will have hatched to begin the lifecycle over again.

Adult Japanese beetles can quickly eat their way through your trees and shrubs, leaving nothing but skeletonized leaves behind

As mentioned above, Japanese beetles can cause damage to around 300 species of plants including shrubs and trees.  This makes many of the trees and shrubs native to Illinois a possible target. If your property is affected by Japanese beetles, your lawn is also at risk of damage caused by the grubs.  Because these beetles cause serious damage in both phases of their lives, they can have a drastic effect on your property.

Adult Japanese beetles feed on the leaves, flowers, and fruit of a wide range of different plants.  The leaves are left skeletonized after feeding and the affected leaves will eventually discolor and fall off the tree.  When these beetles attack a plant that produces fruit or vegetables, this can severely limit the yield.

While most plants will survive feeding from Japanese beetles, they are likely to experience stunted growth and a reduction in fruiting and flowering.  The affected plants are also much weaker after feeding which will make them vulnerable to diseases or other pests.  In cases of large scale and persistent feeding, unhealthy plants may become stunted, injured, or killed.  Healthy and mature plants are likely to survive a Japanese beetle infestation with little to no long-term damage.

As mentioned earlier, Japanese beetle grubs feed on the roots of turf grass which can cause sections of a lawn to turn brown and die.  The grass at the surface cannot get enough water and nutrients when the grubs eat away at the roots.  In addition to the damage caused by the grubs, animals that feed on grubs such as racoons, skunks, and birds will dig up the grubs and cause further damage.  It is possible for a healthy lawn to tolerate no more than 10 grubs per square foot without experiencing severe damage.

Signs of a Japanese Beetle Infestation

Make sure you check your lawn and plants for the following signs of adult Japanese beetles and their grubs: 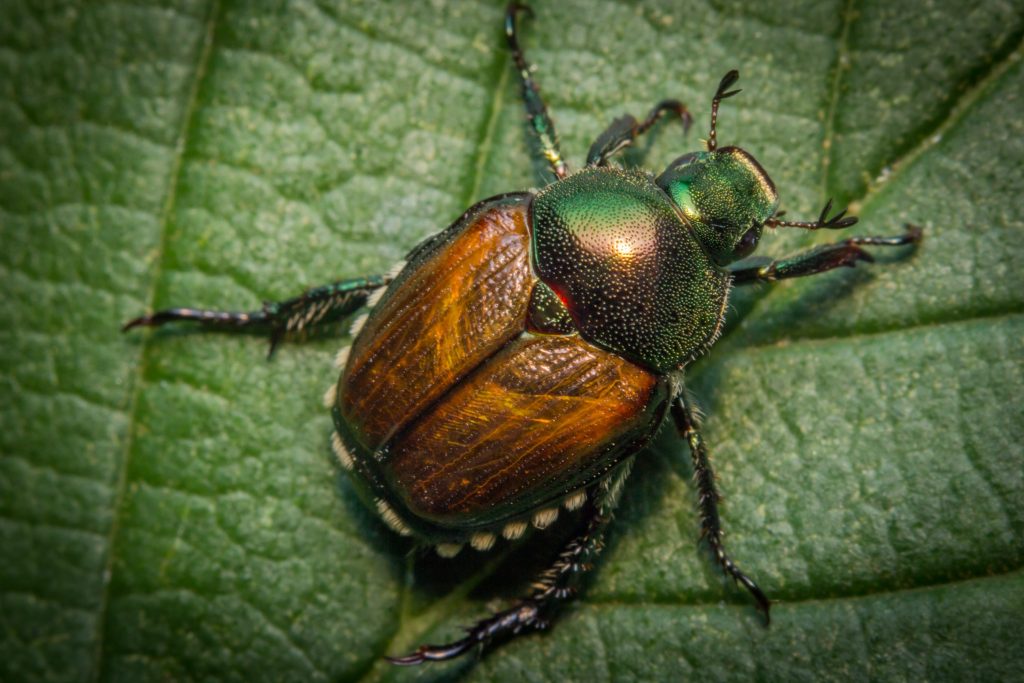 Japanese beetles are easily identifiable by their copper wings and emerald green head & body. Luckily, there are ways to control this invasive pest

The treatments for Japanese beetle grubs will have little affect on the adult population, but effective control will severely limit the next generation.  The best time to treat for grubs is in June and July before the new generation of grubs has time to hatch and develop.  You can also treat in the late summer and early fall if you notice signs of grub damage to your lawn in August.  You should not treat for grubs in the spring because the grubs that hatched in the previous season are too big and they only spend a couple of weeks feeding before their pupal stage and emergence.

The following actions will help you control Japanese beetle grubs:

The Japanese beetle has spread to cover most of the United States since arriving as an invasive species over a century ago and it continues to cause damage to hundreds of plants each season.  Their attack is twofold as the adults eat the leaves, fruit, and flowers of plants while the grubs eat grass roots and cause damage to lawns.  The plants affected by adult Japanese beetles will likely survive, but repeated infestations can lead to significant damage, stunted growth, and eventually the death of the plant.

If you believe you have an infestation of adult Japanese beetles or grubs on your property call our arborists at Hendricksen Tree Care.  Our tree service professionals will determine the extent of the infestation and administer the proper insecticide treatments to control the beetles and grubs.  We provide tree care services for homes and businesses in Arlington Heights, Northbrook, Park Ridge, Palatine, Mount Prospect, Winnetka, Lake Forest, and the surrounding areas of the north and northwest Chicago suburbs.

Look for our next edition of our series on the common tree pests and diseases in the Chicago area.