Home » Murder Hornets: What & Where Are They and What Effect will They Have in Illinois?

Murder Hornets: What & Where Are They and What Effect will They Have in Illinois? 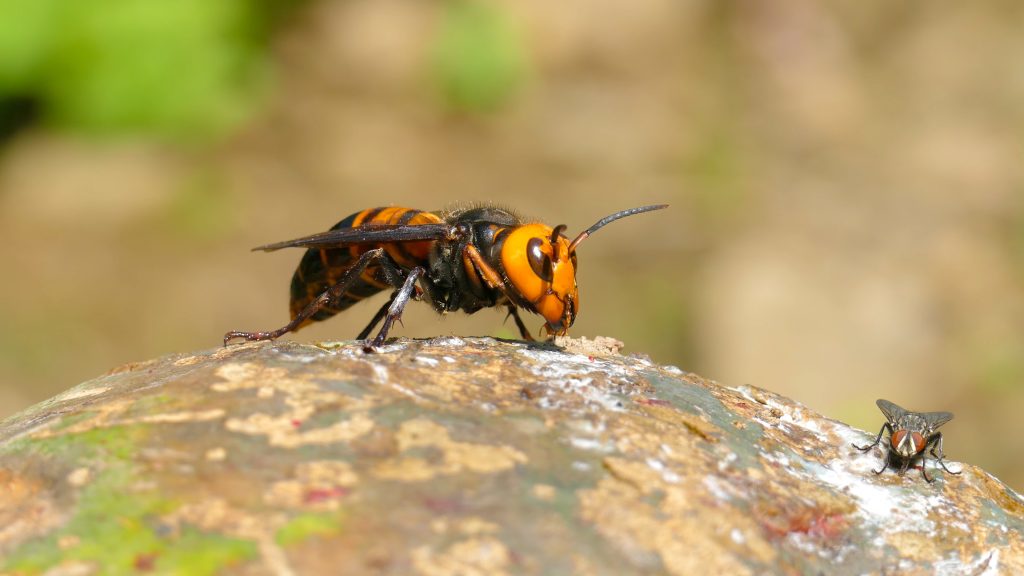 The giant “murder hornet” is a new buzzword going around. Find out more about this Asian / Japanese giant hornet and how it may potentially affect Chicagoland Illinois trees, animals, insects & people in the future

You may have noticed that a terrifying insect has been trending and showing up in headlines lately, referred to as the murder hornet.  The Asian giant hornet (Vespa mandarinia), also known as the Japanese giant hornet and murder hornet, is the largest hornet in the world.  As its name suggests, these hornets are native to many areas in Asia, but they have recently been discovered in the U.S. for the first time ever.

The Asian giant hornet is a menacing insect at 1.5 to 2 inches long with a stinger that injects a potent venom that can cause immense pain and even death in some cases.  News of its appearance in the U.S. and the potential for it to spread throughout the country has caused concern as people are unsure of how these insects threaten their safety or how they will affect native plant, animal & insect species.  In this guide, we will explain what the murder hornet is, where in the U.S. it has been found, and what effect it can have on local eco systems including wildlife and plant life.

While the Asian giant hornet has not reached the Midwest yet, there are tree pests currently in the area that can cause damage to your trees and shrubs.  If you find any sign of a destructive pest on your property, make sure you call our professional arborists at Hendricksen Tree Care to provide tree treatment services.  Our tree treatments can help prevent insect infestations and we can come up with solutions to address an infestation that has already taken place.

What is the Murder Hornet?

The Asian giant hornet, or murder hornet as it is being called, is a large hornet that lives in low level forested areas.  It is the largest hornet in the world as adults can be larger than two inches in length with a three-inch wingspan.  Its stinger is about a quarter of an inch long and it injects potent venom when stinging.  The same hornet can sting multiple times and they can attack in swarms.

Both sexes of murder hornets have an orange or yellow colored head with black eyes and a large mandible used to dig underground nests.  Its thorax is dark brown, and its abdomen is striped with the stripes alternating between black or brown stripes and yellowish orange stripes.  Queens and workers look the same, though queens are often larger, and male drones do not have stingers.

Asian giant hornets build nests underground, often in rotted pine roots or tunnels made by burrowing animals like rodents or snakes.  These nests may consist of four to seven combs that are connected by pillars.  They can be anywhere from 6 to 60 cm deep.

In general, murder hornets are dormant in the winter and come out of hibernation in April.  They are active until the late summer or early fall until they leave the nest.

Inseminated and un-inseminated queens feed on tree sap when they first appear in the month of April with the top ranked queen feeding first.  By late April, the inseminated queens begin looking for a place to nest and start building the nest and laying eggs that will become the worker bees.  The worker bees do not leave the nest until mid-July which is when the queens stop leaving the nest and allow the worker bees to take care of all work and activities that happen outside the nest.  The nest is fully developed by August and in mid-September, the queen stops laying eggs as the colony focuses on providing care for the larvae.  The original queen dies before the end of October.

The males in the colony are ready to assume their responsibilities by mid-September while the new queens take over after the original queen dies in October.  Around this time, the males leave the nest and wait at the entrance for the queens to emerge so they can mate.  Once the males and queens leave the nest, they do not return.

These hornets begin hunting almost as soon as they emerge in April.  The queens start the hunting after they begin building the nest and the workers take over hunting responsibilities by mid-summer.  Asian giant hornets prey on large insects like praying mantises and rodents but primarily attack colonies of honeybees.

A scout is sent from the hive to find a food source and when it finds a source, such as a colony of honeybees, it marks the hive with a special scent.  The hornets will then swarm the hive and take out the entire colony in only a few hours by decapitating the honeybees.  The adult hornets feed on the honeybees and their larvae and regurgitate the bees to feed their larvae back at the nest.

The Dangers of Murder Hornets

Asian giant hornets can be a major issue if they become established in the U.S. because there are no natural predators.  In Asia, the honeybees native to the area have developed a defense mechanism in which they swarm individual murder hornets and vibrate to kill them with the heat their vibration generates.  However, honeybees in North America have no such defense mechanism.

Honeybees are extremely important for pollinating plants and crops in North America including various fruit trees.  The honeybee population has already been declining in North America because of diseases, pesticides, and the loss of their habitat, and the establishment of the Asian giant hornet can accelerate their decline.

It is true that giant hornet stings are very painful and can even kill people as they are known to kill around 50 people per year in their native regions.  However, these hornets tend to nest in areas away from heavily populated areas and they do not attack humans often.  Yet, it is still important to understand the dangers they pose to humans.

Asian giant hornets are very aggressive near their nests and they tend to be the most aggressive in the late summer and early fall.  If the hornets are provoked or if someone gets to close to their nest, they will attack to defend themselves.  Multiple hornets may attack a person at once and each hornet can sting multiple times.  These hornets can also fly up to 25 miles per hour which makes it very hard to run away from them.  If you encounter an Asian giant hornet in the wild, you must be very cautious to avoid provoking it. 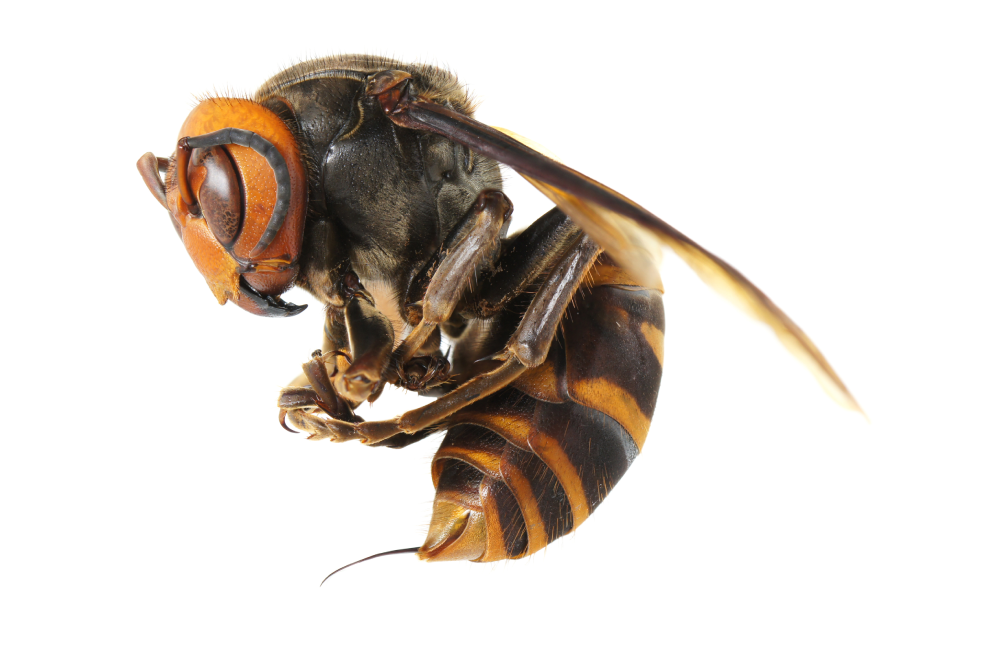 A closeup of a “murder” hornet and the quarter inch stinger. If encountered in the wild you should be very careful as not to provoke them as not even a beekeeper suit can protect against the venomous sting

The stinger of a murder hornet is so long that not even a beekeeper suit can protect you.  Their stings are extremely painful because of the size of the stinger and the potent venom that has the neurotoxin mandaratoxin.  A high enough dose of this venom from multiple stings can be fatal as it causes damage to the flesh and nerve endings and can even trigger organ failure, cardiac arrest, and anaphylactic shock.  Inflammation of the heart and liver can last for months after a sting.

Where are Murder Hornets?

As of right now, the murder hornets have been spotted in the state of Washington and in British Columbia in the Pacific Northwest.  They first appeared in the fall of 2019 and the situation has been monitored carefully to help stop their spread and prevent them from becoming established.  Scientists from Washington State University are helping to eradicate the Asian giant hornets by trapping the queens to prevent them from building nests and starting colonies.

No one knows for sure when or if the Asian giant hornet will make its way across the U.S.  Some are predicting they could reach the East Coast within 2-3 years, but it is hard to get an accurate estimate at this time.  Hopefully, the hornet population can be contained and eradicated to prevent it from spreading across the country.  You don’t have to worry about the murder hornet in the Chicago area yet, but make sure you stay informed enough to know where it has been spotted.

How to Control Murder Hornets

Fortunately, murder hornets are not invincible as there are several methods of control that have been used in their native areas.  However, they are very difficult to control entirely.

The following are the most common methods of control for murder hornets:

The spotting of the Asian giant hornet in the U.S. should be a major cause for concern considering the harm they can cause to people and the threat they pose to the already declining honeybee population.  Fortunately, murder hornets are not yet in the Chicago area.  Make sure you keep up with the latest on the Asian giant hornet situation to know when to look out for it in Illinois and the Chicago area.

There are other pesky insects already in the Chicago area that can cause significant damage to your trees including the emerald ash borer, gypsy moths, bark beetles, and more.  You can help protect your trees from these destructive pests by working with our professional arborists at Hendricksen Tree Care.  We provide effective tree care and treatments to give your trees the best chance of resisting infestations.  We can also identify infestations and create a plan to help minimize the damage and eliminate the pests.

You can contact Hendricksen Tree Care at (847) 305-5524 for tree services in the north and northwest Chicago suburbs.  You can also learn more about tree pests and diseases with our blog series on the common insects and diseases found in the Chicago area.