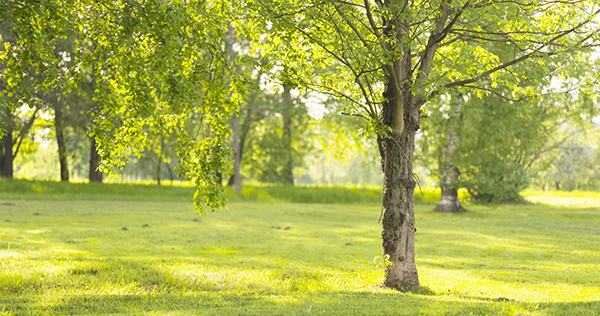 Ash trees in Illinois have a storied history, and a questionable future. Learn why in this article and how Hendricksen Tree Care can help service your ash trees.

This week, we continue our ongoing series of Chicago’s native trees by highlighting the ash tree.  The ash tree has somewhat of a tragic tale in the Chicago area.  This tall, flowering tree has long had a strong presence throughout Illinois, but the introduction of the emerald ash borer has decimated the ash tree population.  The state of Illinois even had a quarantine on ash trees to restrict the movement of the trees and firewood cut from ash to help curb the emerald ash borer outbreak.  This quarantine was started in 2007 but lifted in 2015 because officials determined that these efforts are not effective enough to limit the problem.  Illinois still follows a federal quarantine on ash wood that makes it illegal for firewood from a quarantined state to be transported to an unquarantined state.

The problems caused by the emerald ash borer will be discussed in further detail below.  For now, let’s separate the ash tree from this major problem to appreciate the beauty of the ash trees themselves.  Ash trees are native to Canada and the northern United States and they are resilient to different environments and types of soil.  Even though ash trees have been greatly affected by the emerald ash borer, several species of ash are still commonly found throughout the Chicago area.  In this guide, we will cover the common characteristics of ash trees, the species of ash native to the Chicago area, ash tree care, and how to identify infestations of the emerald ash borer.

Our arborists at Hendricksen Tree Care are experts when it comes to treating pest problems with trees and we can help if your ash tree is affected by the emerald ash borer.

Ash trees are medium sized trees that generally stand between 40 and 60 feet tall when matured, and it is not unusual for them to get as tall as 80 feet.  They are in the same family as olive and lilac plants and consist of many different species under the genus Fraxinus.  The majority of ash trees are deciduous and dioecious which means that the male and female flowers grow on separate plants.  However, the gender of an ash tree is somewhat fluid as individual trees can change from male or hermaphrodite to female trees as they age.

The most defining characteristics of ash trees are the well-defined bark ridges, whorls of elongated green leaves with pointed ends, and their helicopter seeds.  They are great for providing shade and can survive the cold conditions of the Chicago area in various types of soil.  Most species of ash can live for well over 100 years if they receive the proper care and are protected from the emerald ash borer.

The main characteristics of ash trees are described in further detail below:

Though ash trees are hardy plants, they are vulnerable to a range of diseases and pests that can cause them major damage.  One threat that has already been discussed deserves special attention because of the scale of damage it has caused to ash trees in the region: the emerald ash borer. 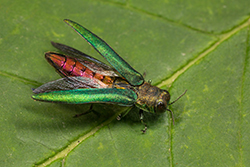 The Emerald Ash Borer is the single most destructive force of ash trees in Illinois, potentially having killed over 200 million trees already!

The emerald ash borer is an invasive beetle from northeast Asia that has caused significant damage to the native ash trees of North America.  It is not known exactly how the emerald ash borer ended up in North America, but it was discovered in 2002 and has continued to spread throughout the continent ever since.  The emerald ash borer has been found in 60 of Illinois’ 102 counties and may be responsible for the death of around 200 million ash trees in Illinois alone.  They typically prefer to infest green and black ash trees, and they are also known to kill white and blue ashes if there are no black or green ashes in the area.

The emerald ash borer is so destructive in North America because the ash trees here are not as resistant as those in their native northeast Asia, and it has no natural North American predators.  They infest ash trees by laying eggs in the bark and when the larvae hatch, they burrow through the bark and inside the tree.  The larvae spend the next year feeding on the fibers inside the tree, forming zigzag tunnels that disrupt the flow of nutrients which starves the tree from the inside.  Mature emerald ash borers then cut a D-shaped exit hole to leave the tree and restart the cycle.

The common signs of an emerald ash borer infestation include the D-shaped exit holes, thinning or dying crown, splitting or damaged bark, and tunnels etched into the wood underneath the bark.  It is very important keep an eye out for these signs and call a tree service professional immediately to treat the infestation.  If the damage becomes too extensive, your only option will be to remove the tree.

While the emerald ash borer is by far the biggest threat to native ash trees, there are several other issues that can affect these trees:

Ash trees are a great presence in yards and landscapes because of the shade and natural beauty they provide.  Aside from protecting your trees against the emerald ash borer, ash trees are relatively easy to maintain.  Make sure you follow these care tips if you have an ash tree on your property: 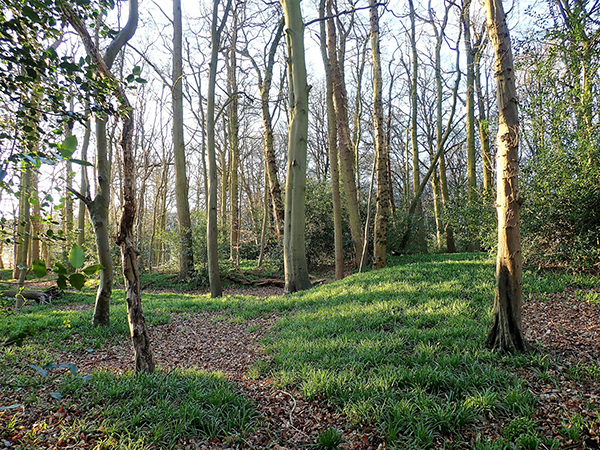 Ash Trees are native to Chicago and surrounding IL cities such as Arlington Heights, providing a beautiful backdrop to forests and landscapes, but are in serious danger due to foreign insects like the Emerald Ash Borer

Ash Trees are native to Chicago and surrounding IL cities such as Arlington Heights, providing a beautiful backdrop to forests and landscapes, but are in serious danger due to foreign insects like the Emerald Ash Borer

Healthy ash trees make beautiful shade trees and they can live for well over a century.  They just need a little bit of care to get enough moisture and nutrients to survive the winter and periods of drought.  However, your ash trees are always vulnerable to the emerald ash borer which has made its presence known throughout the Chicago area.  If you believe your ash trees may be affected by disease or the dreaded emerald ash borer, contact Hendricksen Tree Care right away for our professional tree care services.  Our arborists are experts at identifying the signs of an emerald ash borer situation and we will advise you on the best ways to deal with the issue.

At Hendricksen Tree Care, we are passionate about caring for your ash trees and other trees native to the Chicago region.  Contact us for tree care services in Arlington Heights, Palatine, Mt. Prospect, Barrington, and the surrounding north and northwest Chicago suburbs.

Be sure to look for the next part of our series about native trees of Chicago.